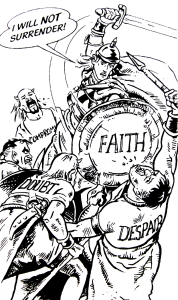 (Jesus:) I want to open your eyes and alert you to the fact that the world is growing darker and more dangerous, and not just spiritually. It began in the spirit world, but the evil spirits that roam the Earth affect the physical too.

Now, more than ever, the Enemy walks about as a roaring lion, seeking whom he may devour in any way (1Pet.5:8). He’s not lying off in the bush somewhere, waiting for you to pass by him. He’s mad and he’s actively hunting for you, looking for an open door, some way to harm your physical life, your spirit, or your possessions.
Of course you don’t have to fear him or confine yourself to a fortress in order to be safe. I am still God and I’m still all-powerful. Those dark spirits cannot go beyond the bounds that I have set for them. And you are My loves and My servants. I will protect you as you go about My work, wherever that takes you. But you do have to be vigilant and watchful. You do have to be on guard and make use of My power in order to be safe. You do have to know that the Enemy is about, and that you’re on his territory and at war, so in order to stay safe and protected, you need to do your part: physically to an extent, and spiritually most of all.

The Enemy knows who you are and where you are, even if all the bad and evil people in the world don’t know. And it’s not difficult for the Devil to inspire those who have already begun living lives of crime and evil to attack those that he points them toward. The evildoers might not know that you’re anything special, but the Devil does‚ and he will try to use these pawns of his to do physical damage to you. I warn you of this because I promised I would always be faithful to My servants. This is an area that a lot of people don’t think much about until something happens to them. So I am being a faithful Protector and reminding you of this area, asking you to heighten your guard through prayer and personal vigilance, and to keep a stronger connection with the spirit world.

This merging of the physical and spiritual worlds works both ways. Just as evil men are more easily inspired by the Enemy to do evil, so can you be more easily inspired by Me and My good spirits–and part of what we can do for you is to be your early-warning system, warning and guiding you away from trouble spots, and giving you supernatural discernment that can help you not to fall into the Enemy’s traps.

My power is not weak, and I will never lose a battle. When the Enemy is allowed to attack you with danger, loss, accidents, sickness‚ etc., there are many reasons. It’s often because I wanted to teach you something very specific by it, or because you didn’t activate the proper defenses and thus your spirit helpers were limited in their involvement.

Although he can influence circumstances and make things difficult for you, you have My full insurance plan if you choose to use it. And that is, as long as you’re close to Me, doing your part in the spiritual and physical, and invoking the power of your spiritual weapons, you are protected. Either his attacks will bounce off harmlessly, or they will be deflected and only allowed to touch you as much as I know is needful‚ or in some cases I’ll allow something to get through because I want to bring a much greater victory out of it‚ greater good. That’s the confidence and assurance that you can have in Me.

The primary way Satan fights you will always be in your minds and hearts, as nothing is more devastating than for the fortress of your heart to be subverted from within. So while most of you keep your attention on the spiritual battles, the Devil will often try what he considers to be the “back door” of the physical realm where you’re not always as careful, watchful, or on guard. 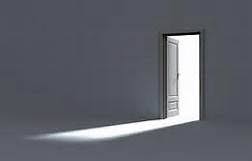 Take care for the “back door”, be watchful and on guard

I’m telling you this because it’s necessary for you to realize that he is also trying to hurt you in the physical. It’s not enough to be on guard against his inroads through criticalness or self-righteousness or murmuring or comparing or discouragement or System influences. You must also watch the physical side and see if there’s any way he might be trying to come in.

You’ll never be able to shore up everything possible in the physical realm, but you do need to be aware and on the lookout for any weak spots, and then either do something about them physically, or bathe them constantly in prayer, beseeching Me to do what you cannot do. This means not just a simple‚ routine prayer for protection that has become a mere ritual to you. This means to wholeheartedly summon My angelic protection around you at all times, especially when you’re sleeping, going out, or leaving things unguarded when warranted, such as leaving your house alone for a weekend, or your car parked for a few hours.

Maintaining your spiritual force field is simple in theory‚ but in practice it’s not that easy to keep it strong. It’s far easier to give way to lethargy or forgetfulness, and try to glide by in half-hearted reliance on outdated weaponry. Maybe your standard “Jesus, protect us tonight” prayer was sincere and powerful the first few times you prayed it, but over time it has become nothing but a ritual, and you say it from habit rather than from the heart. Or perhaps you give lip service to the idea of asking Me everything while you are out and about, but in reality it’s something you rarely do. So although I say the answer is simple, there is effort involved. Remember it as your insurance plan. I and My heavenly hosts are offering you full coverage protection and remuneration against theft, assault, auto accidents, natural disasters, fire, war–the works. We’ve got you covered, but it’s not free. Your fee is to put forth the effort to make your prayers powerful, to slow down and ask Me everything, to work and live and travel with full possession as you take on My mind, to keep praises on your lips for My power‚ and to work with your spirit helpers and listen to them.