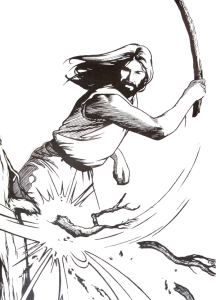 god has no grandchildren

Someone once said, “God has no grandchildren! There’s no such thing as second-generation Christians! Every new generation either has to drop out or cop out—one or the other; bring forth new buds, or die on the vine and become dead!”

“It’s been sort of an inevitable cycle of history that this is the way governments, denominations, and movements of various kinds all revolve! They’re born in the white-heat of the fires of inspiration and of the desire for change, and, led by an anointed leader, they fight and die for the cause until they gain enough followers to “come out from among them and be separate and touch not the unclean thing, and have no fellowship with the unfruitful works of darkness”—and a new “ecclesia” has been formed—the new “called-out ones,” the new church, the new dropouts!” David Berg

A brief look at history, both Biblical and secular, will tell you that indeed all things change. Nothing on this earth is permanent. Even one of man’s greatest empires, the mighty Roman Empire that lasted almost one thousand years; eventually, as grass; withered and fell away. (1 Peter 1:24)

Out with the old and in with the new

The Lord though Ezekiel declared the decay and overthrow of the children of Israel by the “world” in which they lived, and this blog is only one in many voices declaring to our generation the dying gasps of the present-day children of God, a “church” system that has conformed to the system of today.         John 15:2 “Every branch in Me that beareth not fruit He taketh away, and every branch that beareth fruit He purgeth it, that it may bring forth more fruit”.

Has the “old church, the old revolution” lost its savor? (Matthew 5:13 Ye are the salt of the earth: but if the salt have lost his savor, wherewith shall it be salted? It is thenceforth good for nothing, but to be cast out, and to be trodden under the foot of men) this verse is very poignant. We see Ezekiel in chapter 36 verse 20 tolling out the indictment: “And when they entered unto the heathen, whither they went, they profaned My holy Name, when they said to them, these are the people of the Lord, and are gone forth out of His land.”  Do you realize how important salt is in curing meat? It actually stops the meat from rotting. We the salt of the earth, the children of God, have a commission to accomplish; and that is to keep the world from going rotten by liberally spreading God’s Word everywhere and into every heart. However, Beelzebub, the lord of the flies, has so polluted the modern church system that it is beyond reclaim. I think the polluting of the earth’s oceans is an omen of what is happening today in spirit. The ocean’s burden is too much; the salt cannot overcome the type of poisons we are pouring into it. Christianity has become septic by all the poisons that have been allowed into its heart. 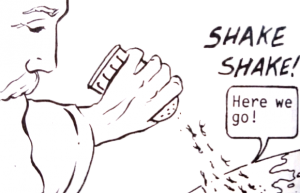 we the children of God have a commission to perform; and that is to keep the world from going rotten by liberally spreading God’s Word everywhere and into every heart

”While the opiate of the world lulls you to sleep, at the same time it sucks you dry! It will drain the very life’s blood out of you, sucking every bit of inspiration, desire to witness and hunger for the word out of you”… Lifelines vol. 29 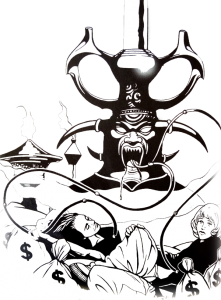 OMG! What will He do….? God will do the same thing he always does, raise up a “new church, a new generation”. This has always been his way, has it not? Noah and his family left the old world behind, King Saul was replaced by a young and full-of-faith David, the older generation of God’s children were left to die in the desert due to their lack of faith. Jesus left the old Jewish religion of temple worship and ushered in the age of grace where His true worshipers would worship in “spirit and truth”. A true spiritual revolution! Throughout church history there have been countless revolutions and reformations.  Today there are no doubt some bright sparks among us, but generally the church of today is looking pretty tired, settled down and secluded in its blessings. (Revelations 3: 14-22) Whenever the Children of God lost their fire and zeal, God raised up a new generation. God will have His mouthpiece, His voice to proclaim His message to the world right up to the very end of the rule of man on earth. Revelations 11: 3, 4 “And I will give power unto My two witnesses, and they shall prophesy a thousand two hundred and threescore days, clothed in sackcloth”. “These are the two olive trees and the two candlesticks standing before the God of the earth”. In my Bible there is a cross-reference that directs the reader back to Revelation chapter 1 verse 13. If you continue reading, you discover that the candlesticks are seven and represent the seven churches of God. Two of these seven will stand before the God of the earth in the time of the end to boom out God’s final witness to a dying world. The world that many of us call “home”! Oh foolish Galatians who hath bewitched thee? This is not our home, and to become part of it is to our shame. 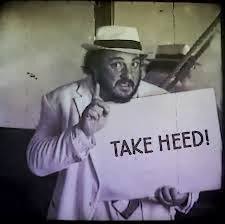