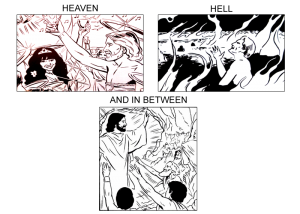 As Christians, we know that we are not saved by our own good deeds and righteous works, but by the love and mercy of God. He sent His Son, Jesus Christ, to die on the cross to suffer for our sins; and if we believe on Jesus and accept Him into our hearts, we are forgiven. As John 3:36 promises, “He that believes on the Son of God has (now possesses) everlasting life.”

Of those who wilfully reject the good news of God’s love, Jesus said, “He who rejects Me, and does not receive My words, has that which judges him—the word that I have spoken will judge him in the last day.” 1 But the question that has troubled many sincere Christians and students of the Word of God down through the ages has been this: “What about the people who never heard the gospel, who never even heard the name of Jesus? How could a God of love send them into everlasting torment in the lake of fire and brimstone when they never even had a chance to hear the gospel or know how to get saved?

“And what about the untold millions of people of different religions who are fairly righteous and are trying to do the best they know how, living up to whatever light they have? How could God send them to hell just because they never heard or understood the gospel or the love of God so that they would want to get saved? Are they going to be sent to eternal torment in the flames of hell, even if they were kind, sweet people who tried their best to worship and please God, even though they never really knew Him or His Word and truth?”

I am personally convinced, from a thorough study of the Scriptures, that God has made some other provision for the ignorant, unevangelized unsaved, those who never heard the gospel of Jesus Christ. God is going to have mercy on them and give them their chance. If they never had a chance to hear and believe the gospel in this life, then the Lord will see to it that they get their first chance in the next life. You may ask, “But how could they believe the gospel in hell?”

It might surprise you to learn that of the 22 times the word “hell” is mentioned in the New Testament, only 11 times is it the original Greek word “gehenna,” the lake of fire. The other 11 times, the original word used was “Hades,” which literally means “the unseen state” or “the unseen world.”

“For it is given unto men once to die, and after this the judgment.”2 But when does this judgment occur? Revelation 20:5, 11–15 clearly states that the unsaved dead are not raised and judged until the end of the 1,000-year Millennium. So where are the unsaved dead waiting until then? Revelation 20:13 gives us the answer: “And the sea gave up the dead which were in it, and death and Hades delivered up the dead which were in them. And the dead were judged according to their works.” Hades, then, would be a waiting state where the spirits of the unsaved dead wait to be judged and sent to their final destination. And this will not occur until the Great White Throne Judgment at the end of the Millennium.

Here then is the next question: If those who never heard the gospel are awaiting their final judgment in the spirit world, can they believe on Jesus there, after they have died, and receive His forgiveness of sins and be saved and liberated? If ever anyone would believe, it would be when they wake up in the next world and find out they were very wrong and that Jesus is the truth! Then they would be sure to believe if someone would only tell them. But some people insist that once a poor lost sinner has died, his “moment of grace” is over and he can no longer believe the truth and be saved even if he wants to.

If this is really the case, then why did Jesus Himself, while spending three days and nights in the heart of the earth between His crucifixion and His resurrection, spend His time “preaching unto the spirits in prison” if there was no hope of their salvation? 1 Peter 3:18–20 says, “Christ suffered for our sins, the just for the unjust, that He might bring us to God. For which cause He also went and preached to the spirits in prison; which long ago were disobedient, when once God waited patiently in the days of Noah.”

Then 1 Peter 4:5–6 goes on to say, “God is ready to judge the living and the dead. For this cause was the gospel preached also to them that are dead, that they might be judged just like men (living) in the flesh, but live according to God in the spirit.” Jesus spent three days in the belly of the earth, where the disobedient spirits of the unsaved dead were imprisoned, and He “preached the gospel to them.” Gospel means “good news”—the good news of salvation.

If it isn’t possible for the departed dead to believe and be saved, why did the Son of God Himself preach to them? Why did He preach the gospel to them and tell them how to get saved if it wasn’t possible for them to repent and be sorry for their sins and to receive forgiveness, salvation, and to be delivered from their imprisonment?

Why did He preach them the gospel? Just as a matter of information so they could be all the more miserable for the rest of eternity in an everlasting spiritual prison? According to the Scripture, the Word of God, Jesus preached to them the gospel. All the millions of people who lived before Jesus came and never knew how to be saved, received an opportunity to hear the gospel from Jesus Himself. And it is my personal conviction that if they received it and believed it, they were forgiven for their sins and released from their imprisonment.

God’s Word indicates that they will have the opportunity to receive the truth right up until the final Great White Throne Judgment of the unsaved. As Revelation 20:12,15 say: “And I saw the dead, small and great, stand before God; and the books were opened. And another book was opened, which is the book of life. And if anyone was not found written in the book of life, he was cast into the lake of fire.” (Remember, the Great White Throne Judgment is only for those who were not saved in this life. Those who received Jesus in this life will have already been raptured and taken to heaven at the Second Coming of Christ 1,000 years before this final judgment.)

The 21st and 22nd chapters of Revelation tell us that only the saved who believe in Jesus by faith live inside New Jerusalem, the eternal heavenly city of the blessed; but it tells us that there are also people living outside the city on the beautiful new earth. It says, “The kings of the earth do bring their glory and honor into it (the city).”3 Who are these “kings of the earth” if the only people around are either those who got saved in this life, who will therefore be enjoying the heavenly city, or those who did not get saved in this life, who will therefore be damned to hell?

Revelation 22:2 says that in the city is “the tree of life … and the leaves of the tree were for the healing of the nations.” What nations will need to be healed? None of the resurrected saved in their immortal bodies are going to need healing, because Revelation 21:4 promises that for us “there shall be no more pain nor death nor sickness, sorrow or crying.” So who are these nations that need healing?

It obviously refers to these kings and nations outside the city, who are a class of people who were not bad enough to go to hell, the lake of fire, nor are they the born again, believing Bride of Christ, those who have the right to enter and enjoy the heavenly city. The kings and their nations are the people who apparently have not yet received Jesus and His free gift of salvation, but whom God has mercifully spared from hell, and given them the opportunity to learn about Him and His love on the beautiful new earth.

Even outside the heavenly city it’s going to be a literal paradise like the Garden of Eden, and those who end up there are going to think it’s heaven on earth, and be very thankful to God for His mercy. They may have had to wait a long time in the spirit world first, but they will finally be released and be thankful for the Lord’s love and mercy, as we, God’s saved children from within the city, minister the healing leaves of the tree of life to them.

For those who finally do end up in hell, it will be because they fought their way there every step of the way over everything God could possibly do to keep them out of hell. They will have insisted on going to hell despite every merciful, loving opportunity God gave them to be saved and repent.

Everyone who has received the love and forgiveness of God through His Son Jesus Christ is saved and bound for heaven when they die. You won’t have to wait a thousand years in the spirit world for your final fate to be decided. Wouldn’t you rather be one of the saved who lives with God Himself in the indescribably beautiful heavenly city, the New Jerusalem, enjoying all of its wonderful pleasures of paradise? God bless you with His eternal salvation. In Jesus’ name, amen.

Taken from the writings of David Brant Berg