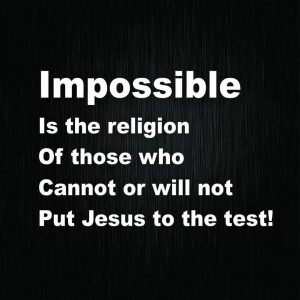 “I will tell you what impossible is. Impossible is the creed of fools. It’s the invention of Satan—tailor-made for those who would believe his lies rather than standing on the power of My Word. It’s the religion of those who cannot or will not put Me to the test.” Jesus

“Impossible opposes the truth of God. It comes from the depths of Hell. Impossible has no place in Heaven; its reasoning does not exist in the Heavenly realm.” jesus

“Impossible is for quitters. Impossible pollutes minds, breaks hearts‚ and destroys bodies. Impossible creates ill health; it promotes sickness and causes disease to fester. Impossible is the way of cowards, the excuse of the defeated. “It can’t be done‚” “no way,” “it’s impossible”—this is the faith of the living dead, the philosophy of fools, the chant of the simpleton, the motto of the moron. The logic of “it’s impossible” is deadly, for it leads to darkness and ends in death and destruction.” Jesus

The father of impossible

“Long, long ago, Lucifer stood at the right hand of God. He bore the light. He was not the light, but he held the light on high for all the inhabitants of the universe to see. He was the standard bearer, the mightiest of all archangels, and he exercised some of the power of Almighty God Himself in helping to rule the universe. Then pride took its grip. Though he held such a high and honored position, Lucifer was no longer satisfied with bearing the light of God—he wanted to be God Himself.” Jesus……………...the story continues tomorrow

“Impossible the imposter—created by the father of lies. Its purpose is to imprison. Impossible is an insult to your intelligence, a threat to your knowledge, a menace to your soul. Impossible opposes all that is truth and sound and right. Wrapped up in this single word “impossible,” such a seemingly innocent and natural conclusion, lies a deadly poison. Impossible is the scourge of mankind; it enslaves and traps and binds. There is no freedom for those who endorse the impossible. There is no power, no light, no life, no liberty. Impossible is a downward spiral—once you are trapped in its grip‚ you go down, down‚ down.” Jesus

Impossible the Imposter is the enemy of God and man, get rid of it, its leprosy.