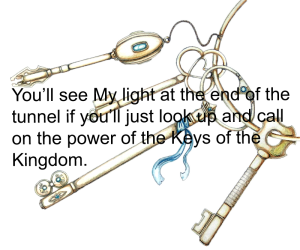 The children of Israel were commanded to show their faith at another time by beginning their march over the Jordan while the river ran to its widest banks. The key to unlock the gate into the Land of Promise they held in their own hands, and the gate would not turn on its hinges until they had approached it and unlocked it. That key was faith.– J. R. miller

what are these keys for?

According to Matthew 16:19 the keys are for binding or loosing whatsoever, which implies whatever or whoever needs to be loosed or bound. Also the word keys is plural which again indicates that there are more than one or even many keys. For example in J. R. Millers quote (see above) the key to opening the promised land was FAITH or the key of FAITH.

who are they for?

Back in Matthew 16 verse 18 it seems to indicate that the keys were given to Peter. But not Peter alone because the disciples went on loosing miracles and binding demons, sickness etc right throughout the book of Acts. In the book of Revelation you will find another key,  “The Key of David” which says in chapter 3 verse 7, that the people who hold this particular key have the power to open and shut, whatsoever. I think it would be a mistake to look at the keys as simply a metaphor.

they are for you too

We believe that the spiritual gifts that Jesus gave to His original disciples are available to His followers today. When Jesus said, “I will give you the keys of the kingdom of Heaven, and whatever you bind on earth will be bound in Heaven, and whatever you loose on earth will be loosed in Heaven” (Matthew 16:19), we believe that He was literally bequeathing the spiritual keys of the kingdom of Heaven to His followers, representing greater access to His power. Believers can claim the keys of the kingdom in prayer to release God’s power to act in any given situation, in accordance with His will.
Matthew 18:18; Luke 10:19; Revelation 1:18

“To those who meet the requirements for using the keys, it is given to wield the greatest power in all existence!” Message from Jesus

And I saw an angel come down having the key of the bottomless pit, and he had a great chain in his hand……Revelation 20:1 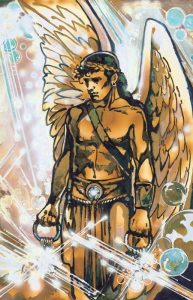